Politics in many countries is dominated by ethnic divisions that undermine economic growth, public goods provision, accountability, and peace and stability. While there are many reasons for the persistence of ethnic divisions, they often endure in part because of the preferences and behaviors of ordinary citizens. This raises the important question: When do citizens and voters stop supporting ethnic politics and instead come to support a cross-ethnic, programmatic alternative? 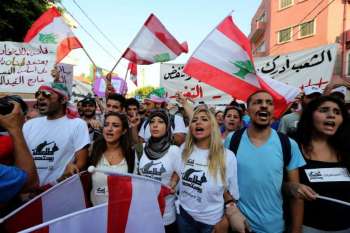 We investigated this in Lebanon in 2015-2016 in the wake of mass cross-sectarian protests that challenged the sectarian quo. The ‘You Stink’ protests erupted over the government’s inability to provide a basic public good—trash collection—due to endemic political stagnation arising from the country’s sectarian power-sharing institutions. The 2015 protests were a precursor to even larger and more enduring protests that began in October 2019.

The project, implemented in collaboration with Sami Atallah and the Lebanese Center for Policy Studies and then Pitt graduate student Leslie Marshall, involved both a nationally-representative in-person survey (with embedded experiments) and a large-scale discussion experiment. We aimed to understand how factors like social pressure and social interaction with individuals from other sectarian groups and socio-economic classes affect support for the sectarian political system and willingness to switch support to a cross-sectarian alternative.

This project was funded by grants that LCPS received from the International Development Research Centre and the Embassy of Norway. Articles from this project were published in The Journal of Politics, The Quarterly Journal of Political Science, and the Journal of Experimental Political Science (see here, here, and here, respectively). Details on the design and implementation of the different project components is below; articles, pre-analysis plans, and links to replication data are available on the Publications tab.

We implemented a nationally representative survey of 2,496 Lebanese citizens from December 2015-February 2016. The survey collected extensive information on citizens’ attitudes towards sectarian politics, their policy preferences, their economic hopes and concerns, as well as their views of recently-discovered oil and natural gas resources. Additionally, we embedded an experiment in which respondents were given a chance to sign a petition condemning the role of sectarianism in Lebanese politics and society. Respondents  were randomly assigned to a ‘private’ version (where they did not have to sign their names) and a ‘public’ version where they did. This allowed us to show that social pressure and the fear of social sanctioning play an important role in individual willingness to publicly support reforming the sectarian political system.

The second project component examines how cross-cutting social interaction—specifically discussion among individuals from different sect and/or class backgrounds—affects support for sectarian versus cross-sectarian politics. This project was inspired by large literatures in political science and psychology that emphasize both the importance of social interaction in shaping political preferences and of cross-cutting identities in undermining ethnic or sectarian group attachments.

We recruited more than 720 lower- and upper-class Christians, Sunnis, and Shia in the Beirut and Mount Lebanon area to take part in a discussion of economic and political issues in the wake of the ‘You Stink’ protests. The central component of the experiment involved randomly assigning participants to take part in homogeneous discussions (discussion with others from their own sect and class) or in one of three-types of cross-cutting discussion (discussion with those from other sects but the same class; from the same sect but other class; and from both other sects and classes). Ultimately, this allows us to show that at least one form of cross-cutting discussion—by members of different sectarian groups who share a common economic class—can shift political support towards a cross-sectarian, programmatic alternative by facilitating learning about shared economic preferences and by weakening fears of social sanctioning by co-sectarians.

Additionally, to obtain behavioral measures of willingness to cooperate, we implemented a public goods game both before and after the discussions. We use this data to examine how sect and class shape cooperation among women versus men. We find that class (but not sectarian) differences undermine cooperation among women but not men, with important implications for women’s collective action capacity.